Things I Will Miss

So, today for lunch I made one of my favorite things.  Wings.  I love wings.  I love all forms of wings.  Hot and spicy, sweet and tangy, plain, etc.  I have not found a wing I do not like.

Honestly, I prefer if I make the wings myself.  There is a store nearby that delivers some really good wings.  It’s called Wingzone.  But even comparing my wings to theirs, I prefer mine.  I can make a darn good wing.  I especially like the sauce I make.

I started making my own sauce several years ago.  One of the things I make very well in general is sauce.  Nearly every kind.  Gravy, pasta sauce, hot sauce, salad dressing, you name it, I can make it.  I also have an uncanny ability to know which flavors mix well together to make wonderfully savory sauces.  I am especially proud of my sweet and spicy habenero sauce.

I stumbled upon it quite by accident.  Well, partly anyway.  I wanted to make my own sauce for wings and I looked up a recipe for a spicy sauce.  I followed the recipe, which took 10 habenero peppers, pretty closely.  I also tossed in some onions and garlic that were not part of the recipe.  After I made the sauce and strained it, I took a taste.  It was like eating liquid fire.

I was supposed to take the sauce and wings to work for a party.  My general rule when serving wings is if I think something is slightly spicy, it is probably too hot for other people.  With smoke coming out of my ears, I knew I could not serve that sauce to my co-workers.  I desperately tried to find some way to tone down the fire.

I took some olive oil and melted down some mayo, raspberry jam, and honey.  I added the molten sauce to this, brought it to a boil then simmered for about 10 minutes.  I tasted it and it was still hot, but not so bad.  I put it into the refrigerator over night and took it to work the next day with my fingers crossed.  I served the sauce on the side.  I had flavored the wings before cooking so they were not totally plain.  Then I issued a warning my co-workers to to be careful with the sauce.

End result, the sweet and spicy sauce was amazing.  Apparently spending the night in the refrigerator after cutting it down with jam and honey did the trick.  It was still spicy, but not so hot anyone needed the emergency room.  But it had this wonderfully sweet and smoky flavor.  OMG it was great.

I have to make that again before the surgery because I sure will miss it after!

At the request of my niece, today I am going to take a day off from posting cats and share a picture of her bearded dragon, Onyxia.  She’s just a baby so she’s still pretty little.  If she grows wings and spits fire, I’m moving. 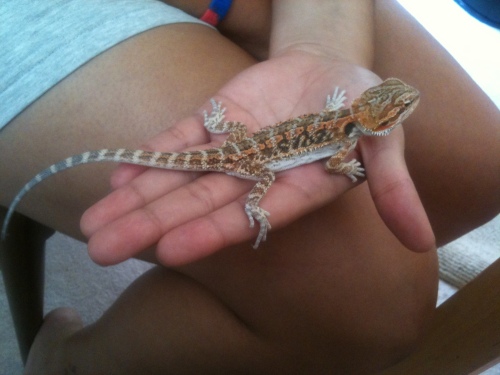 2 responses to “Things I Will Miss”