Today I had my endoscopy and colonoscopy.  I will spare you the details, but things look good in both places.  I have to wait for test results of cultures they took, but the doctor did not see anything that would prevent me from having my surgery.

They are testing me for celiac disease which is an intolerance to gluten.  My sister has that.  They are also testing for bacteria in my stomach.  The doctor did not see any evidence of celiac, but I have to wait for the test results.  I will be so happy if I do not have celiac.

My doctor did all of the other tests except one.  I still have to get the sonograms of my stomach.  That’s it.  That’s all I have left to do.  Well, that and the final visit with the nurse and nutritionist at the surgeon’s office.  I am going to make an appointment for Monday or Tuesday of next week to get the sonogram done. I have to go to the hospital for that.

If I get all of that done by Wednesday, I will have two whole weeks free of doctor appointments and tests.  Woo hoo.

I have to tell you, I did not plan this week well.  I had the appointment with my primary doctor on Wednesday.  I could not get in until late in the afternoon.  I knew they would draw lots of blood, so I fasted all day.  Then the lab took seven vials of blood.  The phlebotomist scolded me for waiting so late in the day to do a fasting blood draw.  I had to eat something before she would let me leave.  I did bring some candy for just that reason.

After that, I went home and ate dinner, followed a few hours later by a snack.  Then Thursday, I had to do a liquid diet for Friday’s colonoscopy.  Not to mention the horrible, horrible stuff that flushes your system they make you drink the night before and the morning of.  I was completely empty going into the test and felt like I had not eaten in forever.

The morning of the test, they tell you not to drink anything for at least three hours prior to test.  Then you get there and they ask you to pee in a cup.  I was like, “OK, you made me drink stuff that flushed me out and then told me not to drink anything.  Now you want me to pee?  There’s nothing left.  I’m totally dry.”

Somehow I managed to eek out just enough for them to do a pregnancy test.  I could have saved them the trouble, but they said it was required for all women under fifty.  I was actually kind of glad to still be included in that group.  That means I’m not fifty yet.

A few days ago, I talked about how stressed out I have been.  I also kind of freaked out about the surgery.  I am kind of glad that they    postponed the surgery.  I was not ready to deal with it yet.

I have been so stressed out that I could not get anything done.  I looked at the pile of tests, paperwork, and other things I had to do and did not think there would be any way I could possibly get any of it done in time.  It got so bad that I could not even do things like plan out a bus route to the doctor office or even pick up the phone to make an appointment.  My stress and anxiety levels were out of control.

Finally, I talked to my sisters.  They both gave me great moral support.  Just to talk about it was a great relief.  I was then able to make a plan.  I made a list of everything I had to do.  Then I divided that list up into manageable parts.  Then as I got stuff done, I checked if off my small list and the bigger list.  I was able to throw away the smaller lists one by one and now the bigger list is full of check marks.

I also did this on a smaller level as well.  Day by day I listed out each step I had to take to get through the day.  If I had a doctor appointment,I listed out all of the steps I had to take to get there and back.  Look up bus schedule.  Print directions.  Take a shower.  Find shoes.  Pack c-pap machine.  Take chicken out of freezer and put in fridge for tomorrow’s lunch.  Load dishwasher.

Yes, it was that bad.  I was constantly having anxiety attacks.  I was so overwhelmed by everything that I couldn’t do anything.  It only lasted a couple of weeks, but it was horrible.

I’m doing much better now.  As you can see, I am almost done with these tests.  I am blogging more again.  And I am feeling a lot better.  I now feel like I will be ready for the surgery.   That feeling may go up and down day by day as the surgery approaches, but at least now I have a plan to deal with those feelings.

I hope to blog a lot more before the surgery.  I might try to get a post up every day.

Here is a typical meal that I eat now.  I will take a photo of the food I will be eating after surgery and we can do a comparison. 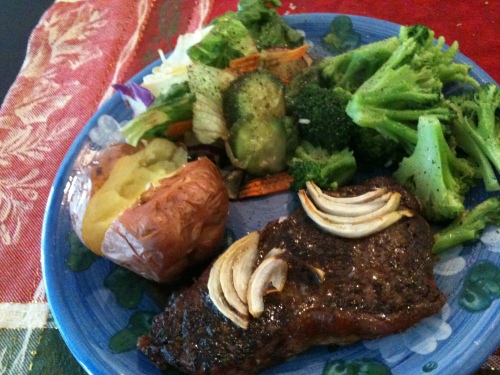