This week has really been a struggle for me while I was in Texas for training.  Nothing wrong with Texas, mind you, but apparently with my lack of planning. I thought I had planned out my protein/food/vitamin regime pretty well.  I was wrong.

I also failed to take into account how eating out for every meal would affect me.  I have eaten out several times since the surgery, but generally, I cook or have many options that fit well into my new diet. The ginormous buffet breakfast offered by the hotel was more difficult for me to deal with than I thought it would be.  They had so many bad food options and very little good food options.  The buffet was laden with bacon, sausage, ham, eggs, freshly made omelets, muffins, rolls, bread, cereals, etc as far as the eye could see.  No hard-boiled eggs.  No fat-free, plain Greek yogurt.  They did have lots of fruit, though.

I did the buffet the first day and made a bad choice.  Bacon. That’s all I’m saying. The last two days, I opted for oatmeal and fruit.  The only problem with that option is that there was no protein.  If they would have offered a plain Greek yogurt option, that would have been golden.  They did not.  I think I am going to send them a message and make a suggestion.  The hotel seemed open to recommendations, so that’s what I’ll do.

My first night there, I had wings.  Probably the best wings I’ve had in years.  I did limit myself to 5 wings and ate the carrots and celery.  That was too terribly bad.  The second night, our sales rep took a group of us out to dinner.  I ended up having steak medallions encrusted with artichokes and roasted vegetables.  I think I wrote about this earlier this week, but I really cannot remember.  Still, the steak sat heavy on my tummy.

I ran out of protein bars and bought some at the hotel.  They made me sick.  They said they had zero grams of sugar, but after a more careful reading, I noticed that it actually had 16 grams of sugar alcohol.  The worst part is, I got sick during my training class and nobody understood what was wrong.  I experienced dumping syndrome.  It really sucks.

So, I have been without protein bars and have had to find other ways to get my protein.  I ended up eating cheese or tuna salad.  The cheese was fine, even though it was a big calorie hit.  The tuna salad made me nauseous.  The tuna was fine, but the mayo may have been too fatty or something.  I have had that reaction from tuna salad in the past.

Last night I went out to dinner with a friend and we went to a Mexican restaurant.  Everyone says you have to do Tex-Mex at least once while you’re in Texas.  I agree.  I’ve had Tex-Mex in Dallas before and it is really good.  Well, I had refried beans, one taco, guacamole, and some corn chips.  I had the worst stomach ache after I got back to the hotel.  The chips may have been a bit much.

I do not eat chips anymore.  I did have a couple of corn chips one time since the surgery when I had some chili, so I thought I was good to have some more.  I guess not.  Live and learn.  I do not eat potato chips, junk food, pretzels, Doritos, cheesy-poofs, etc any more, but a good corn chip is tough for me to pass up.  I guess I’m going to have to do just that in the future though.

I was pretty good with lunch all three days.  I had small salads with balsamic vinegar dressing every day.  I had one small chef salad and two small apple, walnut, blue cheese salads over the course of three days.  So, not too bad there. Fortunately, the hotel had an exercise room and I did use it.  I rode the stationary bike every day while I was there.  I had to work off all those bad food choices.  I felt really good after I exercised too.  It really helped.

I am determined to join a gym when I get back home.  There is one very close to where I live.  It is time.  I have lost enough weight that I can breathe and I’m not in so much pain.  Time to rebuild my muscles and tone some of this up. The best part of the trip was the bed.  I love pillows.  I keep like 5 on my bed at home.  I can never have too many.  Someone must have warned the hotel because check this out! 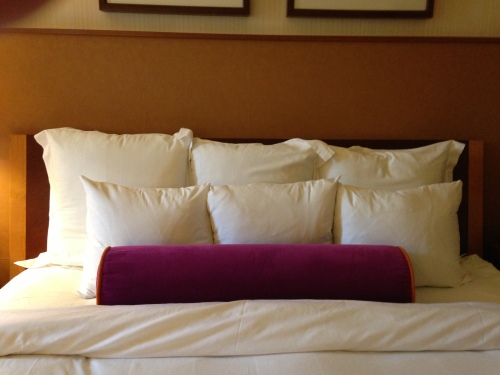 Best part of the trip, let me tell you!

Well, I am on my way back home now.  I sure will be happy to get back on my normal food schedule/plan.  I cannot take too many messed up weeks like this.  I learned a lot about what to do next time though.

Here are some thing I plan on trying:

Taking those steps will certainly go a long way to making eating while traveling much better.

2 responses to “Eating On The Road Post Bariatric Surgery”

People will Hate You! Rate You! Shake You & Break You! but how strong you stand is what Makes You!