When I first starting planning for the gastric by-pass surgery, my sister and I would talk about all of the fun things we would do once I was healthy and thin enough to move around without struggle.

My sister has a kayak and her husband a boat. They went boating frequently in the summer. When I was a little thinner, I used to go canoeing. But since I had put on so much weight, these outdoor activities had become impossible for me.

Admittedly, I’m not really much of an outdoors girl. Walking in an urban center is about as outdoorsy as I get.  I really do not like the bugs and dirt, the lack of air conditioning or anywhere comfortable to sit that comes with the outdoorsy life. I am a spoiled urban chic and I love it!

That said, I have always wanted to go kayaking. I always thought it looked like fun from the time I was a kid. My sister and I kept planning that after the surgery, when I am thinner and healthy, we would go kayaking.

We’ll, yesterday I finally did!!

I had so much fun! At first, I was apprehensive. I slowly got into the kayak. My brother-in-law held the boat in place and my sister helped me in. It was very wobbly and I was nervous about sitting. My brother-in-law just kept saying, “It’s ok just let your legs go. There’s only one place for you butt to go and that’s in the seat…or the river. Either way, don’t worry, we got you.”

I was not comforted.

I did manage to plant my butt in the seat with no problems. They handed me the oars and made sure everything I had with me, my bottle of water, my keys, my cell phone…because you know,  you gotta have a cell phone in the middle of the river…were safely placed in the sealed compartments and pushed the boat with me in it out into the river.

I never used to be afraid of such things. When I was younger and would go canoeing, we had no problems getting wet, splashing each other, laughing at other people falling into the river. I had the distinction of never having tipped a canoe. That was until I proudly bragged about never having tipped a canoe. Then of course, that very same day I did.

It was actually kind of scary. It had rained a lot and the river was kind of rough. There was a downed tree at the edge of the river and we were heading right for it. I held out the oar to stop my head from bashing into the giant root of the tree. The canoe came to a sudden stop and tipped over. My butt hit the riverbed. I had a huge bruise for months. All of our stuff floated down river. A group of canoers sitting on the bank jumped in and managed to get everything, except one sock.

Somewhere out there, is a picture of me all soaked and looking like a drowned rat. I’ll have to see if I can find it.

I started using the oars to steady myself. Slowly, I started going up and down the river. In no time at all, I was whizzing by the picnic site yelling, “I’m kayaking! I’m kayaking!”

My sister and her husband just laughed and laughed. I had no idea why. 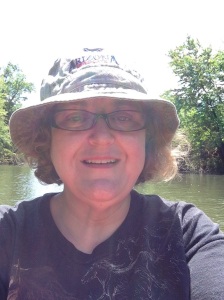 Later that night, my sister told me why they were laughing so hard. They showed me this clip of Bill Murray from the movie “What About Bob?”

I just cracked up.

I did manage to get one picture of myself and one picture of the front of the kayak to prove that I was in it. My sister sent me this cool picture of turtles to put on the blog. I did see turtles on the river. I had no idea that there were turtles in the Potomac.

Anyway, I did it! I went kayaking and did one of things my sister and I planned on before the surgery. If nothing else good had happened to me, being able to kayak made it all worth it!