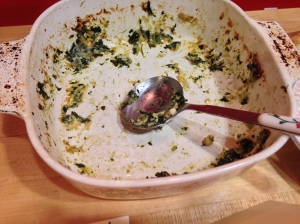 So, my friend Joanna who is in my writer’s group had a wonderful little party last night. The New York Philharmonic performed Sweeney Todd and she was the assistant producer. PBS filmed the production and it was broadcast on Friday night. Joannaaaaaaaaaa had a private screening for all her friends where she served “meat” pies and held a pie making contest.

I made spinach pie. I had never done that before. I was not really sure how to make a spinach pie. I had a three goals in mind when I started. One, I wanted a vegetable and spinach is my favorite. I was a little afraid that with meat pies and fruit pies, I would not have anything that was very bariatric friendly. Two, being bariatric friendly, I didn’t want to eat too much crust. And three, I wanted to win.

So, I perused a few spinach pie recipes and then just winged it. It was absolutely delicious. Even people who claim not to like spinach liked it. And I won!

I won a little plastic 1st place medal, a decanter of whiskey which I cannot drink, and the best part of all! I won a one month light membership to Canvas, which is an alternative co-work space for artistic types who do not have an office.

I was so thrilled because I really only expected to win the bragging rights for making the best pie, which really would have been enough for me. (Don’t tell Joanna, though!)

People have been asking me for the recipe. While I’m a good cook, I’m really bad at putting together recipes. I’m the worst kind of cook. I don’t measure and I just mix everything together until it “looks right”. So, here is the recipe for my award-winning Fleet Street Spinach Pie! Good luck!

salt and pepper to taste

Saute onions and garlic in the butter and oil. Once they are soft, add spinach and kale. Add salt and pepper. Cook until soft.

In a large bowl, whisk together 3 eggs, ricotta cheese. Add salt and pepper. Add in cooked spinach and kale. Mix in feta crumbles.

According to MyFitnessPal.com, if you slice it into 9 servings, there are 206 calories per serving. The entire dish is 1851 calories, so you decide!